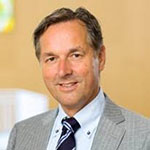 Professor Mulders received his medical degree from the Medical School of the Radboud University Nijmegen. He later completed a residency in surgery/ urology in Rotterdam and Nijmegen, The Netherlands. He then spent 2 years in the United States, where he completed a postdoctoral fellowship in urological oncology at the University of California, Los Angeles, USA. Peter Mulders is now Professor and Chairman of the Department of Urology at the Radboud University Nijmegen Medical Centre, The Netherlands. Professor Mulders’ research predominantly focuses on new treatment modalities and marker research in urological cancers. Professor Mulders is a study coordinator of several international clinical trials in urological cancers. He  is chairman of the EAUrf (European Association of Urology research foundation), and a board member of the EAU (European Association of Urology) and the URS (Urological Research Foundation). He serves on the editorial boards of several national and international urological journals. He has had more than 150 peer-reviewed articles published. In March 2004, Professor Mulders received the Crystal Matula Award from the European Association of Urology.

Patient Profile and the Effect of Novel Hormonal Therapies