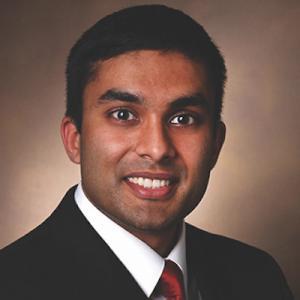 Sanjay G. Patel, MD, completed his undergraduate training in Biomedical Engineering at Vanderbilt University. He proceeded to complete medical school at Vanderbilt University in Nashville, Tennessee, and urologic surgery training at Vanderbilt University Medical Center. After completing a Society of Urologic Oncology Fellowship at the University of Chicago, he joined the faculty as an Assistant Professor in the Department of Urology at the University of Oklahoma in Oklahoma City. Dr. Patel treats all urologic cancers (adrenal, kidney, ureter, bladder, urethra, and testicular cancer) utilizing open, laparoscopic, and robotic surgery techniques. He has a particular interest in the use of minimally invasive robotic approaches to treat urologic malignancies and has extensive robotic surgery experience. He oversees the Bladder Instillation Clinic, where patients’ bladders are directly treated with immunotherapy and chemotherapy to treat superficial bladder cancer. He is also developing techniques to perform intracorporeal robotic urinary diversions, where he is using minimally invasive robotic techniques to create bladders out of the intestinal tract. Dr. Patel works with the Department of Engineering at the University of Oklahoma to develop novel diagnostic and therapeutic technologies to treat urologic disease. He also has an interest in genetic and molecular profiling of cancers, and how that kind of profiling can be used to guide treatment of urologic cancer.

Sanjay G. Patel, MD, Assistant Professor of Urology at the University of Oklahoma College of Medicine, evaluates oncologic evidence comparing open radical cystectomy to robotic cystectomy. This includes addressing morbidity rates detailed in a recent meta-analysis, and questioning whether open diversion could affect these results. Additionally, Dr. Patel analyzes the learning curve associated with performing a robotic cystectomy. Finally, he explains the cost differences between the two techniques, as well as why a more costly operation and/or hospital stay may still be more indirectly cost-effective down the road.

Perioperative Pathways: What We Know Works

Sanjay G. Patel, MD, defines challenges in the detection and surveillance of bladder cancer when using FDA-approved biomarkers. He then evaluates newer DNA methylation- , DNA mutations- , and mRNA-based biomarkers and their ability to account for the limitations of traditional markers.