Erik S. Mittra, MD, PhD, explains the literature and rationale behind peptide receptor radionuclide therapy (PRRT) for neuroendocrine tumors (NETs), including reviewing the NETTER-1 trial that led to its approval. He then discusses the practical aspects and clinical practice of PRRT, how to integrate it in a hospital setting, and future directions for this therapy. 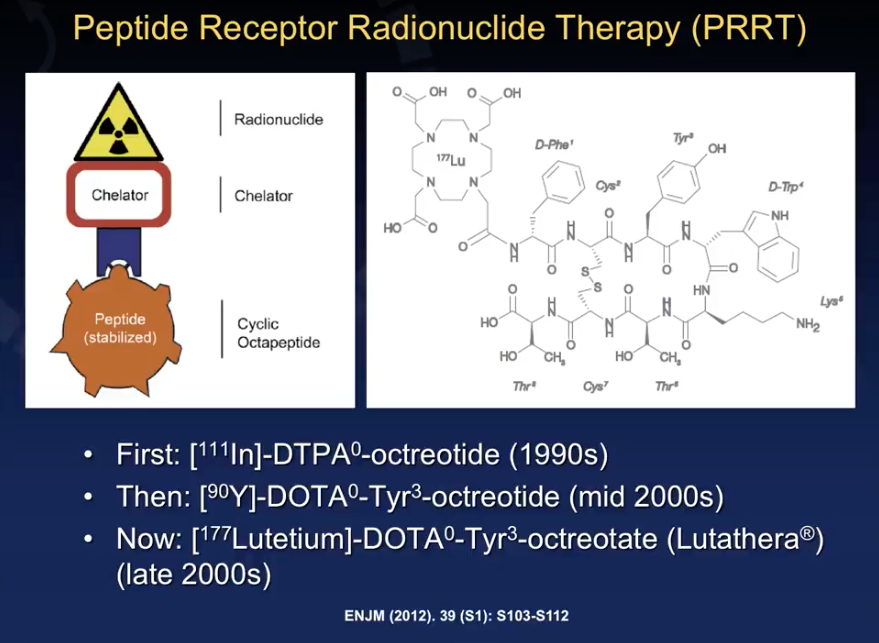 Lutetium Mechanisms of Action for NETs 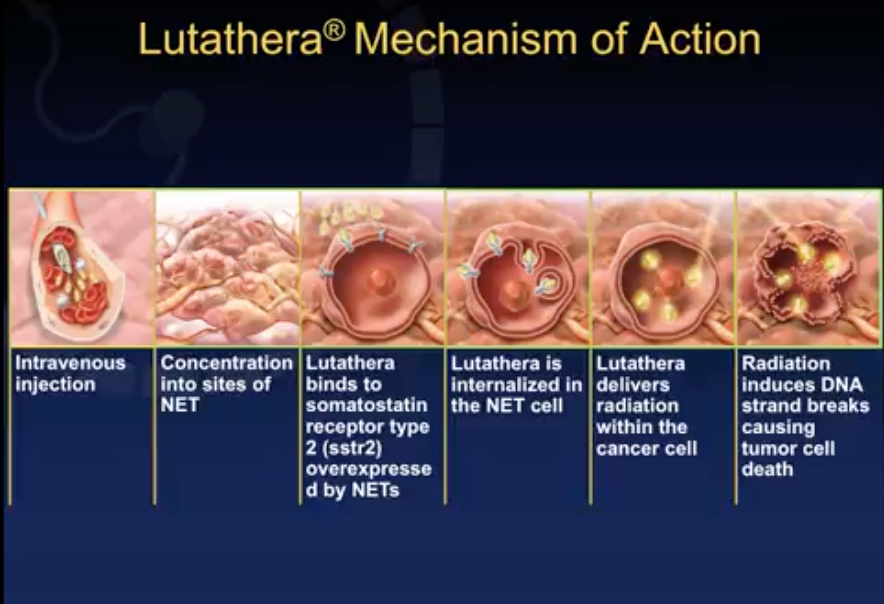 Lutathera is an agonist for somatostatin (SST), a receptor overexpressed on the surface of NET cells. After concentrating into the NET site, Lutathera binds to somatostatin receptors. Then, the molecule internalizes in the cells and delivers radiation inside the cells, inducing tumor cell death. Unfortunately, like in any radioisotope therapy, the radiation dose may extend beyond the cell and cause toxicity.

NETTER-1, a randomized, prospective, multicenter, phase III trial, published in The New England Journal of Medicine in 2017, led to the FDA approval of Lutathera. Although more European centers than American centers participated in the study, the American centers enrolled more patients. PRRT had been available outside of trials for many years in Europe. But, American patients did not have access to the therapy outside trials at the time.

Eligibility criteria for NETTER-1 required that adult patients had a metastatic or locally advanced NET with a Ki67 index less than 20%. Patients must have been progressing while on a standard dose of octreotide, had somatostatin receptor-positive disease, and had a good kidney function status.

The results of NETTER-1 were dramatically positive. It concluded that Lutathera was superior to octreotide in terms of PFS and ORR. The current findings suggest an increased OS but require further confirmation. Additionally, results were favorable to Lutathera in terms of toxicity and QOL outcomes. 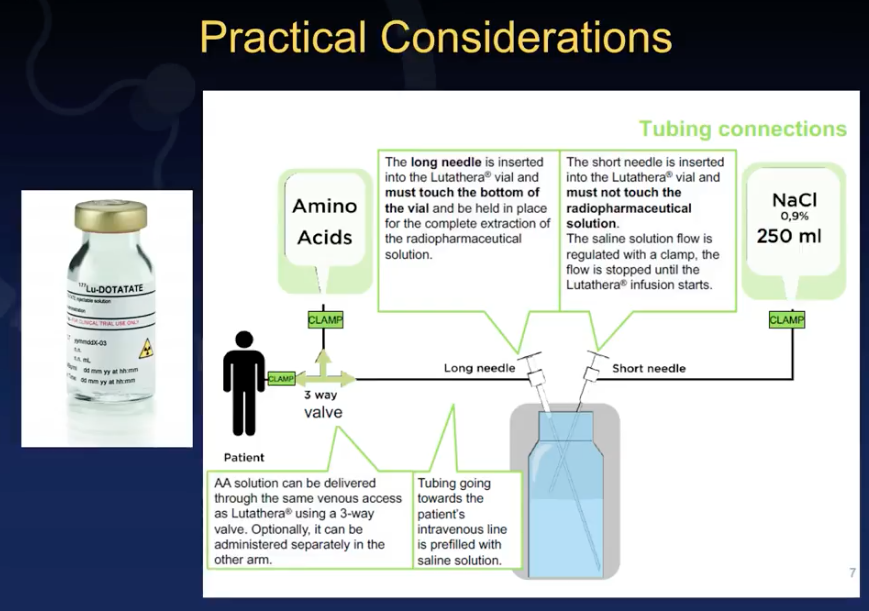 While Lutathera seems like a wonderful therapy based on NETTER-1 results, it may not be appropriate for all patients. Dr. Mittra stresses the importance of treating the aforementioned NETTER-1 eligibility criteria as parameters for patient selection when utilizing Lutathera in clinical practice.

There are also practical challenges clinicians face in terms of physically delivering Lutathera doses to patients. Dr. Mittra reviews guideline recommendations for a two-needle approach, or the gravity method, as well as an automated syringe pump method. Furthermore, he discusses considerations regarding timing of administration, infusion space inside an institution, and precautions when releasing a patient.

Current Issues and Opportunities for Improvements in PRRT

Dr. Mittra highlights the constraints of Lutathera in clinical practice. These limitations include limited amount of academic centers available to perform this therapy and available infusion space. Gaining access to the amino acids necessary for administration can be a challenge, as well. Due to the therapy’s newly-approved status, patients often experience insurance authorization and reimbursement delays.

This new method calls into question the role that nuclear medicine physicians and oncologists play in evaluating patients for this therapy, treating patients, and conducting follow-up. Also, the lack of centralized guidelines in PRRT for NETs is cause for concern.

Dr. Mittra argues that future research into PRRT should focus on sequencing and possible combinations. Additionally, research should explore the possibility of salvage PRRT, intra-arterial administration, novel peptides with higher binding affinity to the SST receptor, the role of yttrium in patients with high-volume tumors, as well as improved dosimetry, radioprotection, and response assessment. 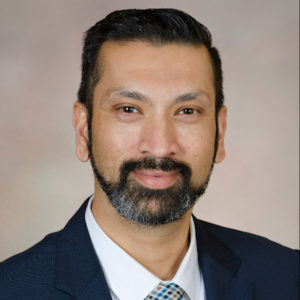 Dr. Mittra is Associate Professor of Radiology, Section Chief of Nuclear Medicine, and Program Director of the Nuclear Medicine Residency at Oregon Health & Science University (OHSU) in Portland, Oregon. He joined the OHSU faculty in January 2018. Dr. Mittra received his medical and graduate training through the MSTP (joint MD/PhD) program at Stony Brook University in New York in 2005. His Master’s was in Anatomical Sciences, and his PhD in Biomedical Engineering. His post-graduate training included an internship in Internal Medicine, also at Stony Brook University. He followed this with a residency in Nuclear Medicine and a fellowship in PET/CT Imaging, both at Stanford University. He stayed on at Stanford as a faculty member for the subsequent 10 years, most recently as a Clinical Associate Professor of Radiology/Nuclear Medicine. Dr. Mittra is interested in all aspects of nuclear medicine imaging, therapy, and research. This includes: adult and pediatric general nuclear medicine imaging with gamma camera and SPECT; PET imaging for oncology, cardiac, and neurologic applications; and bone densitometry (DXA imaging). Targeted radioisotope therapies (TRT) are of particular interest, and he is considered a national expert in this area. His research interests are primarily focused on the translation of novel radioisotopes for imaging and therapy to the clinical setting. He is also very involved with the Society of Nuclear Medicine and Molecular Imaging. 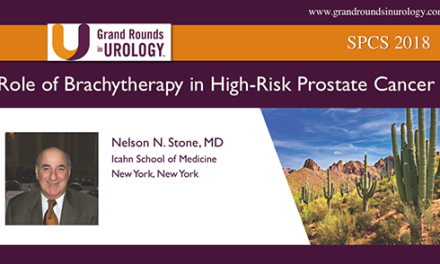 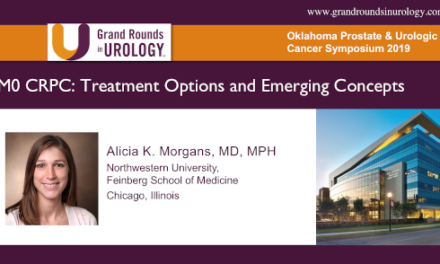 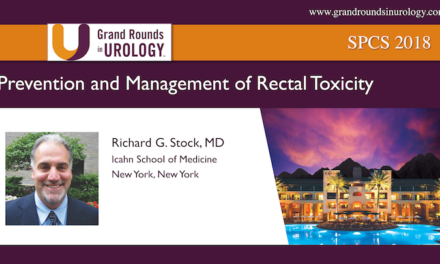 Prevention and Management of Rectal Toxicity 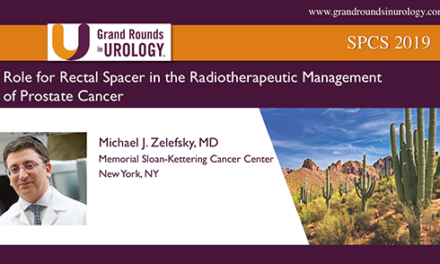 Role for Rectal Spacer in the Radiotherapeutic Management of Prostate Cancer