Androgen Targeted Therapy Across the Continuum of Prostate Cancer

Androgen Targeted Therapy Across the Continuum of Prostate Cancer – Summary:

Activation of the androgen receptor (AR) signaling pathway is critical for prostate cancer (PCa) tumor growth and disease progression. The primary ligand needed for activating the AR is testosterone. Physicians are able to decrease tumor cell proliferation by lowering patients’ testosterone levels. Therefore, it has become the standard of care to reduce testosterone to castrate levels in patients with advanced PCa.

Currently, organizations like the FDA define a castrate level of testosterone as being under 50 ng/dL. However, newer assays are sensitive enough to measure levels below 50 ng/dL, while previous tests could not. Studies suggest that patients benefit from having less than 20 ng/dL, and that lowering the target to this level is desirable. 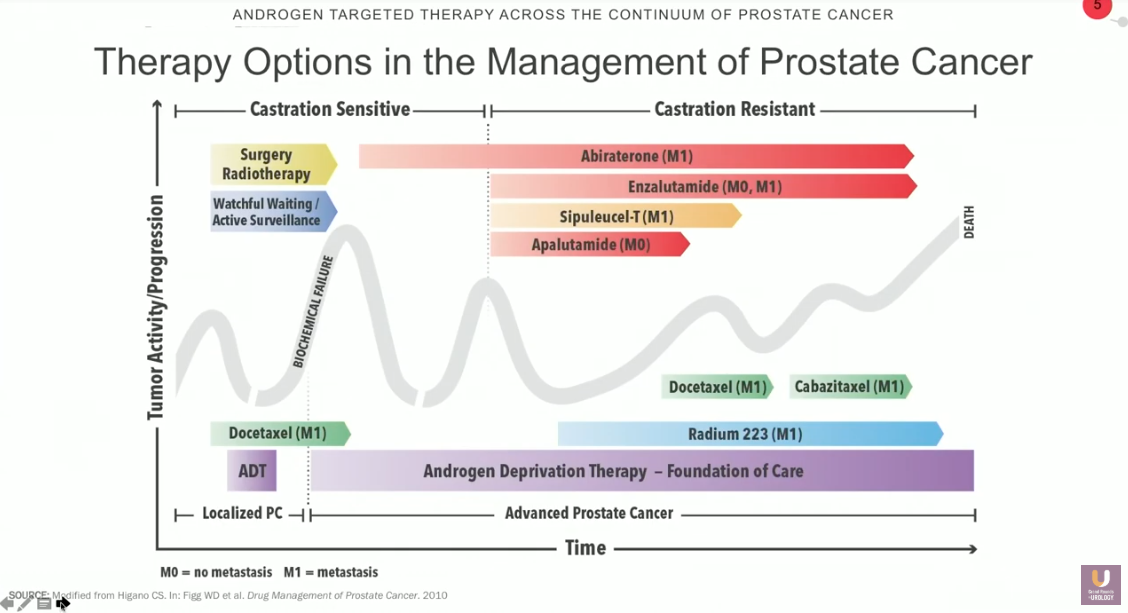 Overall, it is necessary to maintain consistent low levels of testosterone with ADT through a patient’s entire course of care. There are many therapy options for hormone suppression in the management of PCa.

Bilateral orchiectomy was previously the gold standard for PCa care. But its side effects, which include increasing circulating levels of follicle stimulating hormone, can be dangerous for cardiovascular health. Luteinising hormone-releasing hormone (LHRH) agonists and antagonists may address some side effects of estrogens and bilateral orchiectomy. It is important to note that patients may experience initial testosterone surges, as well as microsurges over time, while on LHRH therapies. Third generation androgen pathway inhibitors such as abiraterone, enzalutamide, and apalutamide also have approval in several different stages of PCa. These produce nearly complete inhibition of AR activation.

ADT is foundational care for advanced PCa, but physicians must personalize treatment approaches based on individual patient factors. Monitoring for PSA and testosterone levels, comorbidities, adverse events, and therapy compliance is essential during ADT. Overall, the goal of ADT should be to prolong life, prevent pain and complications, and preserve quality of life.

About the Southwest Prostate Cancer Symposium

The Southwest Prostate Cancer Symposium (SPCS) is a multi-day conference that seeks to educate urologists, radiation oncologists, medical oncologists, and other healthcare professionals involved in the treatment of prostate cancer. The topics focus on current technical aspects of diagnosis and treatment of localized and advanced disease, particularly regarding imaging, technology, and training in the related devices. Dr. Crawford presented this lecture during the 24th SPCS in 2019. In 2020, the 25th SPCS will also offer training sessions involving imaging, scanning, and prostate cancer treatment related devices on site. Please visit this page in order to register for future SPCS meetings. 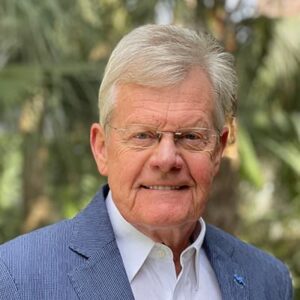 Researcher-physician E. David Crawford, MD, has devoted his career in medicine to educating the public about men's health issues and finding effective techniques and procedures to address prostate cancer, the most common malignancy affecting men in the United States.

Dr. Crawford is an internationally recognized expert in benign prostate hypertrophy, urologic cancers, and in particular, prostate cancer. He has conducted research in the treatment of advanced bladder cancer, metastatic adenocarcinoma of the prostate, hormone-refractory prostate cancer, and other areas of urological infections and malignancies. He has authored or coauthored over 810 scientific articles, has published seven textbooks, authored over 60 book chapters, and provided more than 2,200 educational talks for patients and physicians.

In an effort to raise public awareness about prostate health, Crawford in 1989 founded the Prostate Conditions Education Council (PCEC). The non-profit organization is comprised of a consortium of leading physicians, health educators, scientists, and men's health advocates. PCEC's advocacy for free or low-cost prostate screening has affected the lives of millions of American men. He currently chairs the PCEC.

Crawford is an active member of many national and international organizations, including the American Society of Clinical Oncology, the American Urological Association (AUA), and the American Association for the Advancement of Science. Within the AUA, he has been a member of the Committee to Study Urologic Research Funding and the prostate cancer clinical trials subcommittee. Crawford served on the board of governors, the scientific advisory board of the Southwest Oncology Group, and was chairman of the Genitourinary Cancer Committee for 27 years. This group is the largest clinical trials group in the world.

Crawford's involvement in the national prostate cancer arena has been widely recognized. He has received many honors and awards, including the CAP Cure Annual Award for Scientific Presentation in 1999 In 1997, he was presented with a 'Freddie Award" at the AMA International Health and Medical Film Competition for the program, ITV: The Cutting Edge Medical Report (Prostate Cancer: Understanding, Diagnosing, and Defeating), which Crawford hosted with special guest, retired General Norman Schwarzkopf.

Crawford again won a prestigious 'Freddie Award" 5 years ago... He is a member of Best Doctors of America and was named Healthcare Provider of the Year in the Denver Metro area by the Denver Business Journal.

He has been recognized as one of the Best Doctors of America for the past two decades and is recognized as one of the top 20 urologists in the country, for men, by Men’s Health Magazine. In 2018 he received the honor of being named the Distinguished Alumnus of the Year from the University of Cincinnati School of Medicine. In May of 2019, he received the Presidential citation from the American Urological Association recognizing for his “tireless role in genitourinary cancer research that has benefited countless urologic cancer patients.” He accepted the position of Editor in Chief of Grand Rounds in Urology in June of 2019. In 2021, he was the recipient of the Merle Stringer, M.D. annual award for excellence in medicine by the Florida State Medical Association. 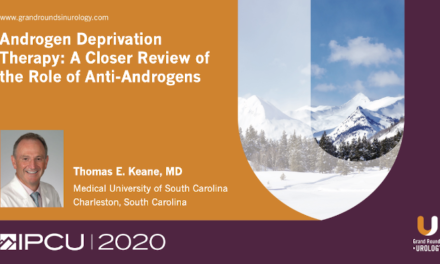 Androgen Deprivation Therapy: A Closer Review of the Role of Anti-Androgens 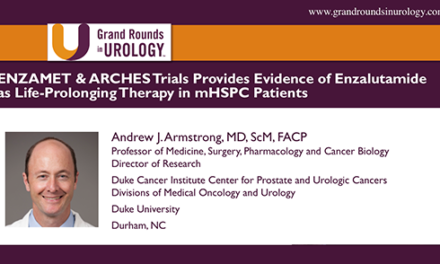 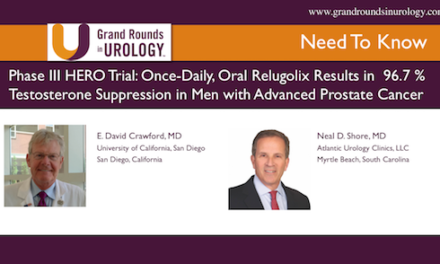 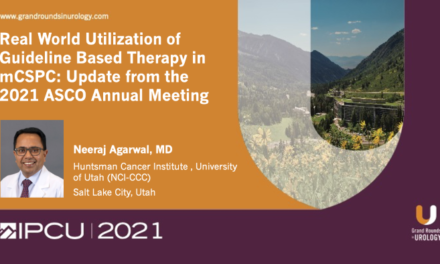 Real World Utilization of Guideline Based Therapy in mCSPC: Update From the 2021 ASCO Annual Meeting