Dr. Felix Feng is a physician-scientist at University of California, San Francisco (UCSF) keenly interested in improving outcomes for patients with prostate cancer. His research centers on discovering prognostic/predictive biomarkers in prostate cancer and developing rational approaches to targeted treatment for therapy-resistant prostate cancer. He also sees patients through his prostate cancer clinic at UCSF. 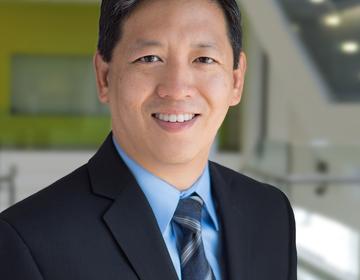 Prostatepedia spoke with him about the state of genomics for prostate cancer today.

Learn more about Prostatepedia and how to become a member.

Dr. Feng: Genomics is becoming an important reality for patients with prostate cancer. We’ve talked about genomics for years in the context of research and possible advances for patients, but we are now reaching the era when these advances are being used in clinical practice or being assessed in clinical trials.

There are many other trials testing specific biomarkers for selection for patients. For example, a few years ago, Prof. Johann de Bono presented the results of a study looking at an AKT inhibitor for patients with PTEN deleted prostate cancers. That’s currently being explored in a Phase III trial, and we’re eagerly awaiting the results of that.

In addition, the presence of androgen receptor (AR) splice variants is being used to select patients for studies. These need to be tested out. Some are molecular biomarkers rather than genomic biomarkers. But for patients with metastatic prostate cancer, we can point to definite examples where science is becoming clinical reality.

In the context of patients with localized prostate cancer or non-metastatic prostate cancer, we’re also seeing a number of advances. There are several tissue-based biomarkers that are now covered in various contexts by insurance companies, and they can be ordered as standard-of-care clinically.

In one of my roles, I chair the Genitourinary Cancer Committee for the Clinical Trials group NRG Oncology. A number of our national trials are Phase II and now also Phase III. The trials that we’re developing incorporate these genomic biomarkers for patient stratification or patient selection. When you start to see genomic markers like Decipher incorporated into NRG or PAM50 trials, it means that, sooner or later, these will become standard-of-care, assuming that the trials are positive.

Are there any open and enrolling clinical trials that either focus on prostate cancer genomics or incorporate genomics into their design that you think men reading this may either want to look into or ask their doctors about?

Dr. Feng: Two of the most promising studies are in patients who have had surgery for prostate cancer and now have a PSA recurrence. They are both actively enrolling.

The first trial that I would highlight is NRG-GU006. This study is open at hundreds of hospitals in the United States and Canada; it takes men who have a PSA recurrence after prostatectomy. We go back, we profile the prostate cancer sample from those patients, and we assess a biomarker called the PAM50 classifier, which we helped validate in prostate cancer as predicting response to hormonal therapy. Patients get stratified by this biomarker and are then randomized to standard-of-care, which is radiation alone, or to radiation plus the next-generation antiandrogen Erleada (apalutamide). They get both genomic testing with the PAM50 classifier and randomization, as well as the opportunity to be on Erleada (apalutamide).

Another trial that is actively enrolling is the NRG-GU002 trial, which takes patients who have very aggressive recurrences of their prostate cancer after surgery, and tests them using the genomic classifier Decipher. In the control arm, those with aggressive disease get randomized to radiation and hormone therapy or radiation and hormone therapy plus chemotherapy with Taxotere (docetaxel).

We and other groups have many other trials in development trying to incorporate these biomarkers, but those are the two trials that are open and accruing.

Who are the lead investigators on these two trials?

Dr. Feng: On NRG-GU006, the co-leads are Dr. Daniel Spratt from the University of Michigan and me. On the NRG-GU002 trial, the lead is Dr. Mark Hurwitz from Thomas Jefferson University.

Is there anything else that patients might want to consider?

Dr. Feng: For patients with metastatic disease, there are a number of PARP inhibitor studies in development right now. We’re looking to move PARP inhibitors into earlier and earlier disease spaces in select patients, largely based on the presence of DNA repair alterations.

This study using the Genentech AKT inhibitor is exciting to me. It’s a Phase III study for patients with PTEN alterations. Not all prostate cancers are the same, but we have traditionally put prostate cancer into one disease. But the many different cancers that comprise prostate disease could be genomically selected or stratified.

That is the future, right? Smaller and more precise categories?

Felix Feng, MD, received his undergraduate training from Stanford University, where he earned a degree in Biological Sciences and received a President’s Award for Academic Excellence. He then received his MD from Washington University in St. Louis, where he received numerous awards for his research and academic achievements. Following this, he completed both a postdoctoral research fellowship and his residency in radiation oncology at the University of Michigan, and subsequently joined the faculty at this institution. In addition to being the Director of the Division of Translational Genomics, Dr. Feng also co-led the multidisciplinary clinic for prostate cancer patients and served as Director of the Genitourinary Cancer Program within the Department of Radiation Oncology at the University of Michigan. In 2016, Dr. Feng was recruited to join the faculty at UCSF, where he currently is an Associate Professor of Radiation Oncology, Urology, and Medicine, and serves as Vice Chair for Faculty Development and Director of Translational Research for the Department of Radiation Oncology.