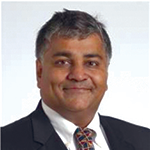 Dr. Manoj Monga joined Cleveland Clinic's staff in 2010 as Director of the Stevan B. Streem Center for Endourology & Stone Disease. Prior to coming to Cleveland, he was the Joseph Sorkness Family Endowed Professor and Vice-Chair of Urologic Surgery and Director of Endourology & Stone Disease at the University of Minnesota. Dr. Monga is recognized as an international authority in endourology and stone disease, and has been an invited speaker in India, Thailand, Brazil, Italy, Greece, Mexico, China, United Kingdom and the Netherlands. He has also acted as a Visiting Professor at many of the major medical centers in the United States.

How to Prevent the Formation of Kidney Stones

Dr. Manoj Monga, MD, discusses the controversies in PCNL in terms of use of antibiotics; endoscopic-guided access; whether it be prone or supine; which calyx to access; whether to use a small sheath or a large sheath; and what type of tube to leave at the end of the procedure.