The conventional National Cooperative Cancer Network (NCCN) risk categories — low-, intermediate-, and high-risk — are largely based on the Gleason score as determined by the microscopic appearance of cells and their organization. However, beneath the surface appearance lies a heterogeneity of biologic behavior that is only now being captured by genomic analysis. The NCCN groupings have been expanded by subtyping intermediate-risk into favorable and unfavorable, and also by including the percent of positive cores. Even so, there remains a significant need for further prognostic accuracy. This is now being addressed by the commercially available gene-expression classifiers, such as OncotypeDx, Prolaris, and Decipher. These gene panels are designed to capture the unrecognized nuances of biologic behavior.

This Commentary has chosen Decipher as an example as, with over 40 publications, it has the most data to support its use. The article will discuss how Decipher is constructed, its benefits as a supplement to the standard risk assessments tools, and offer examples of its use in clinical practice. Additionally, the Commentary will highlight the work of Dr. Dan Spratt and colleagues that integrates the NCCN system with Decipher to achieve further prognostic accuracy (“Spratt, et al., Journal of Clinical Oncology, Feb. 2018”).

Decipher is an assemblage of 22 regulatory genes that associate with tumor aggressiveness (GenomeDx Biosciences, Inc). On the basis of the combinatorial expression of these genes in a particular tumor, its biological behavior can be assessed and predicted with considerable accuracy. The work underlying Decipher was first presented in PLOS ONE  by Ergo, et al. in June 2013. The 22-gene panel was originally optimized to predict a man’s risk of developing metastatic disease.

The Decipher test became commercially available in 2013. Further refinement of the assay predicts for the likelihood of metastases in 10 years and can be performed on biopsy or a whole gland specimen. In 2017, Nguyen and colleagues presented “the first demonstration of the ability of the biopsy-based GC [Decipher] score to predict for distant metastases after definitive radiation and ADT for intermediate-and high-risk cancer,” (Prostate Cancer and Prostatic Diseases).

“Previous studies of Decipher demonstrated that patients in the intermediate and high risk Decipher groups are at a twofold and sevenfold higher risk, respectively, for metastases than patients at low risk” (Klein, et al., J Urol, Jan. 2017).

Decipher is listed in the NCCN Guidelines Version 2.2017 as an available tissue-based test for estimating prostate cancer prognosis. It is now covered by Medicare and also by many insurance programs for high-risk cancer and for a PSA rising above nadir. If not covered by insurance, the out-of-pocket cost is ~$4000, but there is ongoing work to provide these tests for <$1000 as a direct-to-consumer product.

Examples of Decipher in clinical practice:

radiotherapy following a prostatectomy in locally advanced disease, i.e. positive surgical margins, extracapsular extension, or seminal vesicle involvement. Current practice tends to track the post operative PSA and offer radiation upon the development of an (increasingly) minimal rise above undetectable, i.e. possibly at PSA 0.2 ng/mL— or even lower. Decipher has been shown to identify those men who are genomically destined to exhibit an early postoperative PSA rise — men who might benefit from immediate radiation.

advanced cancer at prostatectomy. In one third of the men, based on the Decipher score, the initial treatment plan for adjuvant or salvage radiation was changed.

for Metastatic Potential,” examined “how frequently histologic Gleason 3 + 3 = 6 tumors had the molecular characteristics of disease with metastatic potential” ((Klein, et al., above, ibid). Their examination of specimens from 269 men found that intermediate and high Decipher scores were found in 13% and 7% respectively, information that might help guide the selection of men for active surveillance.

An important feature of the Decipher assay is the prediction of likelihood of developing the clinically significant end-points of distant metastases at 10 years and prostate cancer-specific mortality. The development of distant metastases is now accepted as a surrogate for both prostate cancer survival and overall survival. In contrast, the NCCN and D’Amico risk groups predict for a patient’s pretreatment likelihood for biochemical recurrence, a measurement “not optimized for survival outcomes” (Spratt, et al., ibid).

Treatment decisions are regularly made daily by clinicians on the basis of the NCCN clinical/pathological risk-groups, i.e., low-, favorable and unfavorable intermediate-, and high-risk categories. Examples of frequent real-life clinical decisions are: active surveillance to be suggested or not, and adjuvant hormone therapy to be recommended or not.

The thrust of the effort by the researchers in the JCO article was to acknowledge the prognostic deficiencies that tumor heterogeneity imposes within the NCCN groupings, and sharpens them by integration with genomic- based information based on Decipher. The product of their extensive analysis was a 6-tier clinical/genomic (CG) classifier to predict the likelihood of distant metastases in 10 years and a 3-tier model for use in clinical trials. The goodness of fit of their models was validated prospectively in two cohorts of 5937 men who had had a prostatectomy.

How to assign points in the integrated NCCN and Decipher systems to achieve the 6-point clinical-genomic categories:; wWhat outcomes are predicted,; and what to do with the estimated prognosis?

The method is quite straightforward. Answer: sSum the points assigned to each risk level in each of the two systems.

The four risk categories of the NCCN schema are each assigned points as follows: low, 0 points;, fav-int, 1 point;, unfav-int, 2 points;, and high, 3 points.

The simplified 3-tier system was developed for clinical trials. It compresses the 6-tier model into three tiers yielding 10-year prognoses for metastases as follows: low, 3.5%; intermediate, 29.4%; and high, 54.6%.

The final task for the patient and clinician, after calculating the percentage risk for metastases, is to jointly develop a treatment plan that takes the risk prognosis into consideration in relation to the benefits and downside of a proposed regimen.

In prospective cohort II in the Spratt study, 29.9% (292/977) of men based on their biopsy 4-tier NCCN risk assignment were reclassified in the 6-tier model.

➢ 17.1 % of men initially classified as NCCN low-risk were reclassified to favorable

intermediate, i.e. Gleason 3 + 4 = 7, potentially making them ineligible for active surveillance in most schemas. This percentage of reclassification parallels the documented likelihood that 20 – 30% of men with initial biopsy Gleason score 6 are found on confirmatory biopsy to be Gleason 7.

➢ 54% of men initially NCCN favorable-risk were reclassified to unfavorable risk, a change likely to affect the decision whether to add adjuvant hormone treatment after radiation therapy. [See study cited below.] And, 44.4% of men in the favorable NCCN group were reassigned to low risk in the GC system.

Lastly; an example of the CG risk classifier in clinical practice:

In a study of 121 men with NCCN intermediate-risk prostate cancer (IR-PCa) treated with radiation and no ADT between 2005 – 2011, Berlin et al. (Int J Rad Oncl Bio Phys., June 2018 June) retrospectively evaluated biopsy specimens with the CG classifier (Int J Rad Oncol Biol Phys. June 2018). Their quest was to determine whether the NCCN or GC classification better predicted for 5-year biochemical recurrence and metastases. Using the two current NCCN two subcategories of intermediate-risk cancer, 60 of 87 men initially staged as NCCN unfavorable-risk were reclassified to favorable and 3 of 33 favorable-risk were assigned unfavorable status on the basis of their CG scores.

Their finding was that the CG model performed significantly better than NCCN in predicting these end points. The clinical-genomic model was almost 90% accurate at predicting metastases. Their conclusion: “We therefore recommend the use of clinical-genomic risk stratification to identify IR-PCa patients who can be treated with DE-IGRT [dose-escalated image-guided radiation therapy] and safely omit combinatorial ADT.”

The NCCN risk categories incompletely capture the disparity of biologic behavior within each group. By integrating Decipher with the NCCN system, a clinical-genomic classifier has been developed which substantially improves prognostic accuracy. 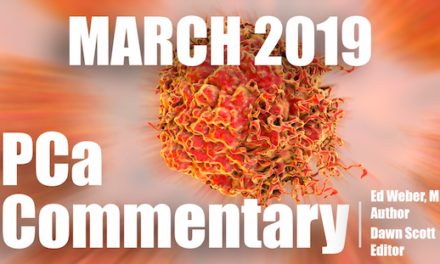 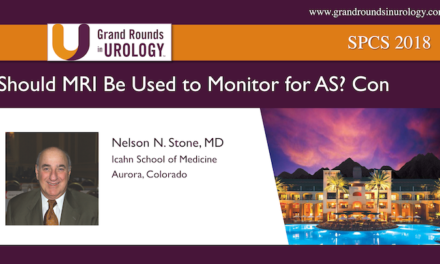 Should MRI Be Used to Monitor for AS? Con Argument 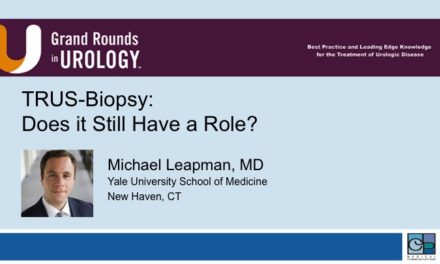 TRUS Biopsy: Does it Still Have a Role? 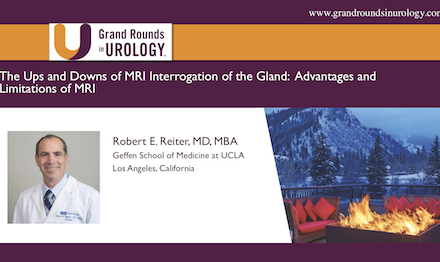 The Ups and Downs of MRI Interrogation of the Gland