Prevalence of Nocturia in US Women

Timothy K. Byler, MD, presented “Prevalence of Nocturia in US Women” for the Grand Rounds in Urology audience.

How to cite: Byler, Timothy K. “Prevalence of Nocturia in US Women.” July 11, 2019. Accessed Jan 2022. https://grandroundsinurology.com/nocturia-in-us-women/

Prevalence of Nocturia in US Women – Summary:

Timothy K. Byler, MD, discusses the significant quality of life impact associated with nocturia, as well as underlying diseases and causative factors. He then reviews findings on the epidemiology of nocturia and its prevalence in women in the United States.

The Impact of Nocturia on Quality of Life

An estimated 28 million adults suffer from clinically significant nocturia, defined as waking to void 2 or more times per night. This condition can  severely impact patients’ quality of life (QOL). These adverse effects can range from a loss of productivity and ability to work as a result of interrupted sleep, to catastrophic events, such as fracture-causing falls, particularly in elderly patients, and clinical depression from exacerbated tiredness. An observational study reported that nocturia is more bothersome and causes a higher detriment to QOL than daytime lower urinary tract symptoms (LUTS).

Despite the negative impact of nocturia, physicians often under-diagnose and treat the condition. In a real‐life survey of physicians and patients, on average, patients sought consultation after one year and received treatment 106 weeks following the presentations of their symptoms. As a further barrier to proper care, physicians generally based initial medical therapy decisions based on sex, with 59% of men recieving an alpha blocker and 76% of women recieving anticholinergics in this study, rather than patient-specific sympotoms.

Awareness of the specific causative factors of a patient’s nocturia is imperative for directing effective treatment. For instance, the presence of edema in the lower extremity can affect diaeresis. Physicians can easily address this by counselling patients to raise their legs several hours prior to bed. Patients may also present with nocturia due to underlying diseases, such as uncontrolled hypertension, endocrine disorders, and obstructive sleep apnea. 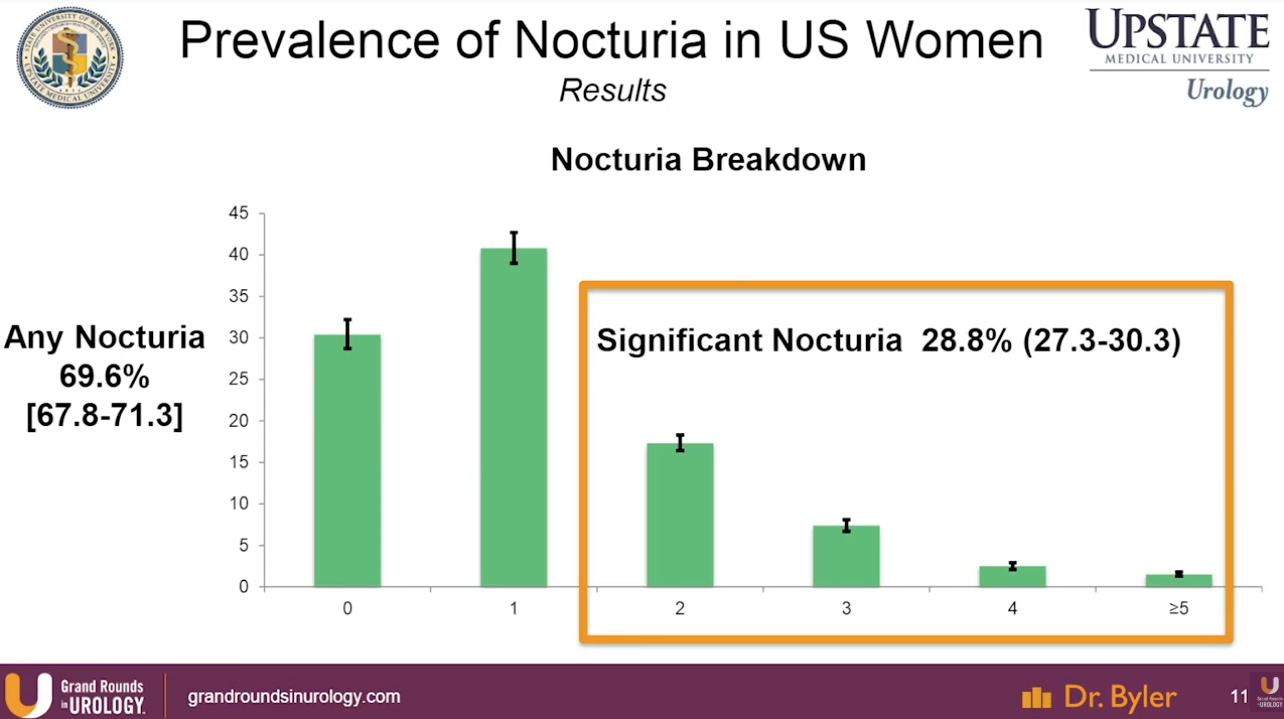 This presentation reviews a study examining the epidemiology of nocturia, focusing on women, using a cross-sectional, United States population-based survey, the National Health and Nutrition Examination Survey (NHANES). Findings databased between 2009-2014 showed that a staggering 69% of women reported nocturia, with 28% reporting significant nocturia.

In comparison, only 62% of men in the same cohort reported having nocturia. This study did not find an association between obstetrical or gynecological factors and rates of nocturia, although it did find a significant correlation with other factors, including urge incontinence, hypertension, and arthritis. This work highlights the high prevalence of nocturia in women, and consequently need for increased awareness of this issue. Clinicians can take steps to intervene by routinely inquiring about nocturia in women patients in order to better diagnose, treat, and address the QOL issues associated with this condition. 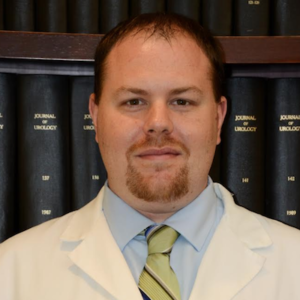 Timothy K. Byler, MD, has been an Assistant Professor of Urology at SUNY Upstate Medical University in Syracuse, New York, since 2014. He received his Bachelor of Arts in Cell Biology and Neuroscience from Rutgers University and his Doctorate of Medicine from New Jersey Medical School. He completed a 6-year Residency in Urology at SUNY Upstate Medical University. His main clinical interests include lower urinary tract symptoms, vasectomies, low testosterone, urolithiasis, and prostate cancer detection techniques such as MRI-guided fusion prostate biopsy. He is a member of the American Urological Association. 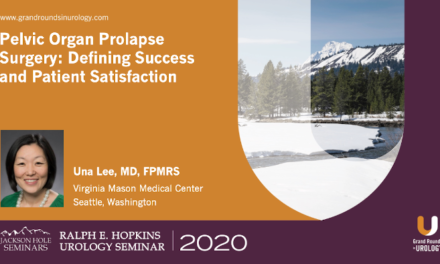 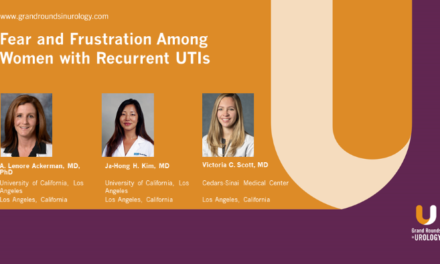 Fear and Frustration Among Women with Recurrent UTIs 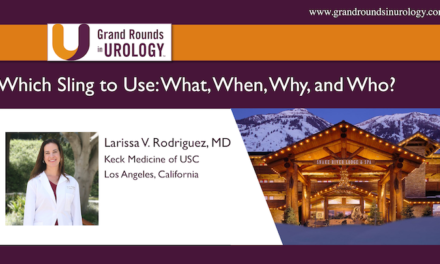 Which Sling to Use – What, When, Why and Who?